Locked-in Syndrome (LiS) is a rare neurological disorder usually resulting from a lesion to a region of the brainstem called the pons, most frequently an ischemic pontine lesion.

Additional conditions that can cause locked-in syndrome include infection in certain portions of the brain, tumours, loss of the protective insulation (myelin) that surrounds nerve cells (myelinolysis), inflammation of the nerves (polymyositis), and certain disorders such as amyotrophic lateral sclerosis (ALS).

Any of the above can cause the complete disruption of all the motor fibres running from grey matter in the brain via the spinal cord resulting in interruption to the body’s muscles and also damage to the centres in the brainstem important for facial control, breathing, swallowing and speaking. However consciousness and cortical functions are preserved. It is of vital importance to accurately test and assess the cognitive abilities of all patients in disorders of consciousness using one of the recognised batteries of evaluation such as the Coma Recovery Scale-Revised (CRS-R). Time and patience are of the utmost importance in evaluating a patient as it is extremely tiring for them to attempt to respond with, in many cases, only eye movement or blinking.

The American Congress of Rehabilitation Medicine (1995) defines LiS as a syndrome characterized by preserved awareness, relatively intact cognitive functions, and by the ability to communicate while being paralysed and voiceless.

Treatment should first be aimed at the underlying cause of the disorder. For example, reversal of a basilar artery blood clot (thrombosis) with intra-arterial thrombolytic therapy may be attempted up to six hours after symptoms onset. Tumours may be treated with intravenous steroids or radiation.

Often affected individuals in the beginning may need an artificial aid for breathing and will have a tracheotomy (a tube going in the airway via a small hole in the throat).

Feeding and drinking will not be possible via the mouth (it may cause respiratory infection by running into the lungs rather than stomach), therefore initially patients will be fed through a feeding tube. Following assessment of their swallowing ability, most patients gradually start with eating smooth purees and thickened liquids. Tracheostomy, mechanical ventilation, cardiac failure, chronic obstructive pulmonary disease, uncontrolled emotional lability, improper positioning during feeding, undernutrition or dehydration are factors that may lead the healthcare team to remain cautious regarding feeding through the mouth.

Early recognition of LiS is important for rehabilitation. It is essential that LiS patients play an active role in decision-making processes regarding their rehabilitation. A reliable code to indicate yes and no usually constitutes the basis of communication. Initially many use eye movements and blinking to communicate. Because language skills are usually intact, many employ a system of spelling via an alphabetical code whereby the person with LiS indicates the desired letter by moving their eyes or blinking.

Early on, individuals with LiS need to be equipped with a means to indicate their needs or a desire to communicate. Should the patient regain control of a reliable movement, that could enable the activation of a switch enabling access to communication devices (eg computer with synthetic voice).

Attention should also be aimed at the early rehabilitation of the small voluntary movements that remain or recover (often in a finger or foot or swallowing and sound production). Rehabilitation and various supportive therapies are highly beneficial and should be started as early as possible.

To promote functional use of the patient’s emergent voluntary movements, it can be helpful to progressively move the patient into a more vertical position. Exercises to maintain range of motion, as well as breathing, eyes, head, trunk and limb control exercises are performed throughout the rehabilitation process. Stretching exercises, use of antispasmodic drugs or botulinum toxin injections help to decrease spasticity. Recovery of near-normal motor control, speaking, swallowing and walking are extremely unusual.

According to the International Encyclopaedia of Rehabilitation and researchers, recovery of horizontal eye movements prior to the first four weeks is associated with a good neurological prognosis (Bauer et al., 1979). Recovery of the oral-motor area (speech and swallowing) begins later and spreads over a longer period as does recovery of movement in distal parts of limbs of individuals.

The great majority of patients are weaned from their tracheostomy during the first months with one third able to utter isolated comprehensible words after the first year (Casanova et al., 2003). During inpatient rehabilitation, more than 50% of individuals start feeding orally and their gastrostomy is removed during the first year.

Devices to aid in communication and other assistive technologies have proven beneficial as well as allowing individuals to become active members of society (see Further Information section below). Infrared eye tracking devices now permit affected individuals to use a computer with artificial voice, control their environment, surf on the internet and send email. In rare cases, some individuals have recovered limited motor abilities, however, in most cases such recovery does not occur. Those who recover some motor control in hand or head (as will over half of LiS patients) can use this to communicate with a computer and sometimes control their wheelchair.

Recent studies have noted that despite significant motor disability affected individuals can and often do retain a good quality of life.

Level of independence is directly related to motor recovery. The majority of LiS patients can move around independently, most often in powered wheelchair. However very few  reach a level of motor recovery enabling them to feed and perform activities of daily living on their own (Beaudoin and De Serres, 2008). Even after several years, spasticity often remains a significant problem for many. Of note, individuals with LIS usually do not suffer from a pain syndrome during the chronic phase. 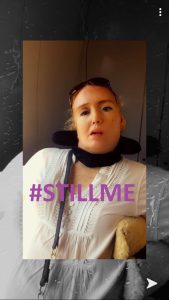 Click here for  the Australian Register for Disorders of Consciousness (ARDoC)

Each of the following books has been written by a person who is living Locked-in:

This webpage may be helpful for diagnosticians and clinicians dealing with patients who have suffered TBI:
headsafe.com

DISCLAIMER: The information provided is designed to support, not replace, the relationship that exists between a patient / site visitor and his / her existing health care professionals.