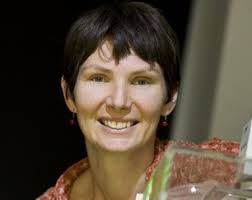 Alzheimer’s disease (AD) is the most common form of dementia, affecting ~30% of the elderly population over 75. Although classic symptoms include a decline in memory, the condition is only truly diagnosed at autopsy based on the presence of pathological features known as amyloid-beta (Aβ) plaques and neurofibrillary tau tangles in the brain, as well as neurodegeneration of specific brain regions including the hippocampus and cholinergic neurons of the basal forebrain (cBF neurons). The current standard treatments for AD are drugs that aim to promote the function of the remaining cBF neurons, thereby improving cognitive dysfunction (e.g. Aricept), and people who are taking medications that inhibit cholinergic function for other medical conditions (e.g. scapolamine) have increased risk of AD. However, the most widely accepted hypothesis of AD is that the accumulation of Aβ is causative of the cognitive decline and neurodegeneration. Aβ is known to impair communication between neurons and cause them to degenerate. Furthermore, familial AD results from mutations in the gene for the amyloid precursor protein  or the enzymes that generate Aβ. Although Aβ also accumulates in people with no family history of AD, the cause(s) of sporadic AD are less clear.

Studies of human populations have found that people who have suffered from sleep apnea, the most common form of sleep-disordered breathing, are at 2-3 fold increased risk of developing AD. We hypothesise that this is because these conditions are accompanied by cBF dysfunction, which subsequently triggers Aβ accumulation. We and others have found that degeneration of the basal forebrain correlates with Aβ levels and can precede cogntive impairment in humans.  Furthermore, surgically induced loss of cBF neurons in mouse models of AD causes the accumulation of Aβ, hippocampal degeneration and memory loss. Moreover, we have new evidence that people with sleep apnea who develop AD have basal forebrain degeneration up to 4 years before their AD diagnosis. In addition, we have observed that mice subjected to an experimental sleep apnea model that induces hypoxia, similar to that experienced by humans with sleep apnea, subsequently undergo cBF neuron degeneration.

Although sleep apnea with hypoxia is curently treated with continuous positive airway pressure (CPAP) during sleep, and CPAP use can slow cogntive decline, 35-75% of people either discontinue or only intermittently use CPAP. Furthermore, we have observed that at least 30% of people attending sleep clinics for the first time already have cognitive impairment, which could indicate that they already suffer from cBF degeneration. Importantly, we have been able to prevent the cBF degeneration in our mouse model by stopping the expression of the death receptor p75 neurotrophin receptor (p75NTR) in cBF neurons, and have also shown that loss of p75NTR expression in cBF neurons inhibits the accumulation of Aβ and cognitive decline in AD mice models. In parallel work, we have developed a pharmacological means to block p75NTR function which can not only prevent cBF neuronal death but appears to enhance the function of cBF neurons.

The aim of this application is to further understand the mechanistic links between sleep apnea, cBF dysfunction/loss and AD, and to test whether p75NTR inhibition is a possible alternative treatment strategy to CPAP therapy that could be developed to prevent cBF loss in people with sleep apnea so as to reduce their risk of developing AD.