ALZHEIMER’S AND OTHER NEURO DEGENERATIVE DISEASES - 2018

ALZHEIMER’S AND OTHER NEURO DEGENERATIVE DISEASES 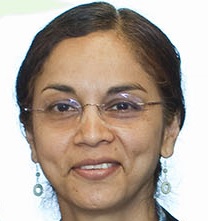 Watch Dr Parvathi Menon accept her research grant and hear a bit about the project.

Amyotrophic Lateral sclerosis (ALS) is a progressive, eventually fatal disease of the human motor system. The commonest variant of the disease is rapidly progressive with average survival of 3-5 years after diagnosis. Research undertaken by me and other members of my group has shown that a brain functional change called hyperexcitability is an early and reliable diagnostic marker of ALS.

A striking finding in the above studies was the early occurrence of hyperexcitability throughout the brain in ALS despite predominance over selective muscles and brain hemispheres. Further, body regions supposedly less dexterous in their movement and considered to have less dense brain connections seem to develop the phenomenon of inexcitability quite early in ALS.

These findings led us to consider other modalities of assessing changes in brain function in ALS. One of the approaches we have used is of MRI studies of the brain with analysis of a unique aspect of brain function which is the connectivity between regions and the formation of so called functional and resting networks. Our early MRI studies have shown increase in inter-regional connectivity in patients with ALS which correlates with brain hyperexcitability.

A new technique we are using to understand brain connectivity is the technique of TMS EEG. With this multimodal approach I, along with colleagues, hope to closely observe and study ALS patients using clinical and standard testing techniques complemented by the multimodality research tools to provide a clearer understanding of the brain changes driving ALS.